If you’ve been around the forums long enough you’ve probably seen posts and comments from our staff and even our users referring to the “Sangoma 7 Distro” or “SNG7”. The Sangoma Distro is a derivative of CentOS which itself is a Linux distribution that provides a free, enterprise-class, community-supported computing platform functionally compatible with its upstream source, Red Hat Enterprise Linux (RHEL). This means that the Sangoma Distro itself is a variant of Red Hat. The “7” references the “7” in the CentOS Distro and RHEL 7.

The Sangoma Distro started it’s life close to 10 years ago as the Schmooze Distro (way back with CentOS 5) and slowly morphed/grew/upgraded into the FreePBX Distro and now the Sangoma Distro. It’s seen many iterations over the last 10 years but it is still primarily based on the CentOS and RHEL distro releases. Which gives FreePBX stability from upstream Red Hat.

EPEL packages are usually based on their Fedora counterparts and will never conflict with or replace packages in the base Enterprise Linux distributions. EPEL uses much of the same infrastructure as Fedora, including buildsystem, bugzilla instance, updates manager, mirror manager and more.

What this means for you, the end user, is access to hundreds of other RPMs for your FreePBX system that you can use to enhance your product. Additionally the Sangoma team also builds PHP 5.6 (which is used by FreePBX 14) and NodeJS 8.16.0 (used by some of our commercial products).

A few weeks ago we announced (SNG 7.6 Testing Release) that the CentOS 7.6 updates, released by CentOS back in October 2018, were now available to FreePBX users in the Sangoma Distro through our testing repository. This is, in large part, thanks to the collaborative efforts of engineers at Digium and Sangoma working together. Matteo Bignotti (@mbignotti) , who joined Sangoma as a part of the Digium acquisition, was one of those engineers and I want to briefly highlight him in this post.

Matteo is a true blue Italian, originating from the sunny city of Milano over 30 …plus a few more… years ago. With his seductive accent and a talent for BSD/Linux applications, Matteo pursued a career as a web programmer back in the late 90s working together with Telecom Italia at their MMS/sms portal delivering content to their users. His technological thirst was not quenched though, and he knew he could not stop his quest for knowledge. It was one spring day in 2005 that he discovered the intricacies of phone systems with Asterisk and Switchvox and set upon what he thought would surely be a new career path.

After working at several personal Asterisk projects, Matteo had a revelation. While he truly appreciated his new skill, he realized his efforts would be better spent writing code as a result of his unique ability to see instinctively how systems should interact; and how to make them work. It was then Matteo recognized his true calling had been right all along as a system developer he joined the Switchvox team in 2012 and quickly owned the distribution and has been working tightly with CentOS ever since.

As a result of his versatility, extensive experience and savvy familiarity with all things web, mobile, client and server, he constantly rises to any challenge thrown at him and loves every minute of it.

Favorite quote: “I had a broken watch once and even it was right twice a day”

So now you know a little bit more about Matteo and his experience working with CentOS and how that has already benefited the FreePBX Distro. Moving forward we hope to have Matteo more involved in helping with the FreePBX “SNG” 7 distro.

About a week ago our QA team notified us that the SNG 7.6 upgrades were ready to go into “GA” (General Audience) release. Therefore, we are proud to announce that the QA cycle has completed and as of last week we pushed the release of 7.6 into our stable branches. Which means if you ran a yum upgrade on your system you were presented with well over 200 packages to upgrade. Many including performance and security fixes and at no cost to you.

For more information you can see our release notes here: https://wiki.freepbx.org/display/PPS/SNG7+PBX+Release+Notes

We have also updated our downloadable distro, in which we removed the ability to install Asterisk 15 from a base install (it’s now End of Life) and upgraded our base Asterisk versions to 13.22.0 and 16.3.0 which are both selectable at installation time. To download the distro and try out the updated installer checkout our downloads page: https://www.freepbx.org/downloads/freepbx-distro/ 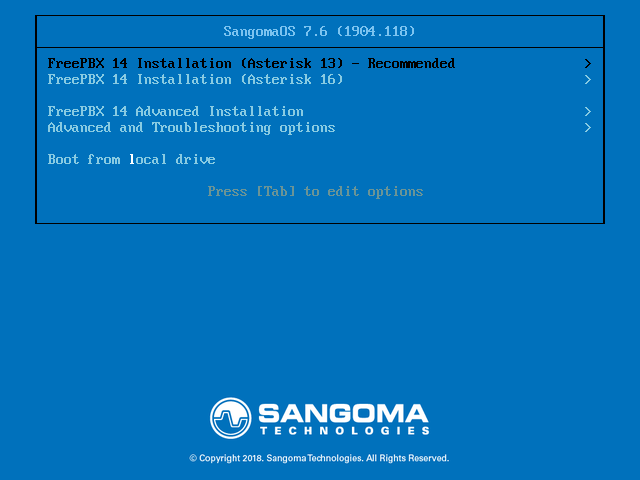 From all of us here at Sangoma, Thanks for using FreePBX!