As I am slowly putting together all the pieces of my old proprietary analog system, I’m having difficulty finding a decent wifi based SIP phone. I see lots of DECT based phones but I don’t want my phones to be tied to a base. I’ve worked hard getting good wifi coverage over the house and want to leverage it.

Wow, looks like the Linksys WIP300 sucks pretty bad. I see a few others that are $1,000 and up. That’s way too much. Not looking for a lot of features. Just answer and make calls.

Anyone familiar with the UniData WPU-7800? 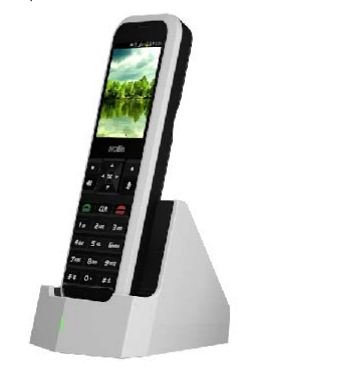 $170 still seems like a lot but maybe that’s the price level I need to get used to.

How do you feel about SIM-less (WiFi only) Smart Phones? There was a place here in town that was selling them for $25 a piece with no contracts or SIMs.

It’s what I use for Wireless connectivity. They’re used, but usually dirt cheap. I use Zoiper on them and they work just fine.

Sure, a possibility. It’s just that the form factor of a wireless phone is so familiar to everyone. Is it easy to answer calls using a smartphone with SIP software?

Separately, thanks for pointing out Zoiper. I started looking at SIP software for my regular phone. Such a confusing welter of options I gave up. I will try it.

I was recently looking at a warehouse solution for a friend. He needed portable phones and to be able to do bar-code inventory management. I got him tablets with Zoiper installed, and cameras for the bar-code scanning. The cameras were a bust (couldn’t focus at any distance) but they are loving the phone part (which I tossed on as an experiment). They went on to continue to use the tablets as in-house phones are are not using some old Galaxy S3s for their inventory scanners. I’m trying to convince them to ditch the tablets, but they are just enamored with them.

We are a nursing home with a newly-installed (by me) FreePBX system. We have 4 deskphones, 9 SIM-less Android smartphones and 15 iPads. We’re currently engaged in implementing the iPads as comms devices, using CounterPath Bria. Right now the Androids are running CSIPSimple but I’m going to change them to Bria to minimise support/education - plus, Bria has a better integration with a PBX (e.g. it has a Transfer button, which is hidden in a sub-menu on CSIPSimple). Bria is a very clean piece of kit for very small money.

We also have two Unidata ICS1000G units - we use them for “parked” incoming calls for patients. They perform very well in that role - not super-robust and the menu system is a little obscure but, once configured, they do the job just fine.

We have a lot of trouble with the smartphones going “unavailable” as they move through the premises (for between a few seconds and a few minutes). I’m working on solving this - I believe it’s because SIP is performed over UDP, the default setting on all softphone apps. If you’re just using them within a single wifi environment then it makes sense to switch to TCP for the SIP - my tests so far are encouraging. There is also a fundamental difference in the internal wifi handling between the smartphones and the ICS1000G units - the smartphones will hold onto a poor signal long after a better one is available from a closer AP, whereas the ICS1000G will jump to a better signal much quicker. This makes a big difference if your users are constantly moving around, as ours are. Our Ubiquiti Unifi AP heads can apparently be fine-tuned to improve this irritating behaviour in the smartphones, but I have yet to experiment with that.

As to ease of use - well, a good SIP app on a smartphone looks and behaves pretty much like the built-in dialer on any smartphone, so it will feel familiar to most. Plus, of course, you can install a SIP app on your regular smartphone and it will auto-register to the PBX as soon as you come within wifi range - no need for any new phones at all, perhaps?

Nothing against Bria - a fine piece of software.

I did a little research too, over the past 10 years or so, and I’ve found that SIP connections to smart phones are usually unreliable, partly because of the inherent issues with UDP and partly because these little gnomes like to chat and the CPUs on many of the older units just can’t keep up. That was what led me to used Zoiper:

On the downside, the version I downloaded to my test machine yesterday crashes occasionally on hang-up - not a critical time in the call, but it’s still something I’m keeping an eye on,

I’ve been reading a lot of good things about IAX, but am I right in thinking that the advantages would only be “external”, i.e. from us to our provider? Does it have anything that would improve/eliminate our problem of smartphones going lagged then unreachable if they move around? Most of our SIM-less smartphones are Sony M4 Aqua models, the rest are high-end Samsung Galaxies (with SIMs). The M4’s are a little short on processor and memory but the Samsungs seem to go AWOL just as frequently. Part of my problem is that we are a 24/7 operation so it’s difficult for me to “play around” with testing alternative configurations.

There’s no reason to not try it - it’s free and it doesn’t interfere with your Bria installation. If you load it and it doesn’t work for you, delete it and move on.

IAX is a UDP protocol but is a little more compact and doesn’t use as many resources (hence the NAT friendliness).

It’s true that IAX was designed for Asterisk-to-Asterisk connectivity, but it was also designed to be lower impact that SIP. I’ve tried dozens of combinations trying to find something that works better than Zoiper over IAX and I just keep coming back.

Since IAX is a TCP protocol, it is a little more compact and doesn’t use as many resources (hence the NAT friendliness).

I stand corrected - IAX2 (the second version of IAX) is always UDP (not TCP).

Kirk - I just noticed that the Amazon offer you pasted is misleading: that’s an ICW-1000G in the picture (the one we have), not a WPU-7800 (which is an older model, I believe).

Dave - I’ll report back when I finish testing TCP vs UDP.

These are currently available in our portal:

Jes1111, that amazon page actually has both model numbers. So I don’t know what’s going on. And amazon has your Sony m4 Aqua for $200. No where near the $50 that’s been tossed around.

Well, I’d say it’s the ICW-1000G that you should go for, not the older model. I note that the advert actual lists “fast L2/L3 roaming” as a benefit/feature - this ensures you can “walk and talk” with it without too much droping out (assuming you have good wifi coverage). Big advantage for users on the move.

I wouldn’t necessarily recommend the M4 Aqua - we chose it because a) it’s waterproof (we’re a nursing home so all sorts of “water hazards” available) and b) it was on special offer from one of the UK networks as a PAYG deal for £80 (about $120?) and we’re running them without any SIM card anyway. Any Android/Apple smartphone will run a SIP app including the one in your pocket

- Zoiper, CSIPSimple, Grandstream Wave are all good (and free), Bria is under $10 and suits us because they have an iPad-specific version that makes better use of the screen than the others and has “office” features like the Transfer button when you’re in a call.

For those interested we have been developing a new Wifi Phone device based on the Widefly WF360.

For nursing homes, it can accept nurse call from any nurse call systems that have an android app.

Its reasonably priced unlike its competition.

The app on the phone is a customised Bria client with API access. It can also do full SIP provisioning to make it easy to roll out.

If there are any resellers interested, we can provide samples.

Looks good. Any resellers yet for the WF360?

We have a couple in Australia and one in New Zealand.

As we develop the product we are expanding where we sell it to.

Too bad. It would be prohibitive to ship only a couple of units to the US. Well post here if you get a distributor in the US.

On my home wifi Zoiper yielded network errors even though I was standing right next to the access point. Switching Zoiper to TCP got rid of the error. As I moved away from another of my access point I started to see some dropouts, same as I’ve always seen with Google Voice, but the connection was maintained.

I thought about looking into WiFi, but wanted my choice of phone (Sangoma S500). I didnt want to run Cat5 so I got a Netgear Powerline Ethernet Adapter to connect via my power outlet to my switch and router at the other end of the house. Works great. I can stream Roku HD and have G722 voice with zero issues. Less than $100 for the gigabit model on Amazon.