When I try adding the pre-installed system recording ‘minions-not-answering-leave-message’ sound n the System Recordings module, I’m getting a There was an error, See the console for more details message:

What console is FreePBX referring to here? Where can I find the console output from there error message above? I looked at the Asterisk console and there is not a lot of messages, but maybe I need to set debugging or verbose to a higher level other than 0?

I also looked in the FreePBX GUI under Reports → Asterisk Log Files and all I see are a bunch of remote UNIX connections and disconnections when the sound gets added occurs: 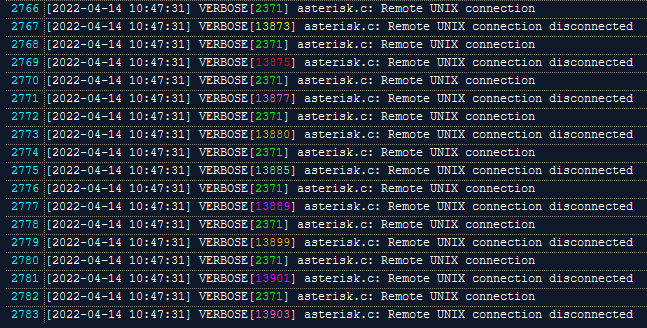 This is what I was originally trying to add to the System Recordings: 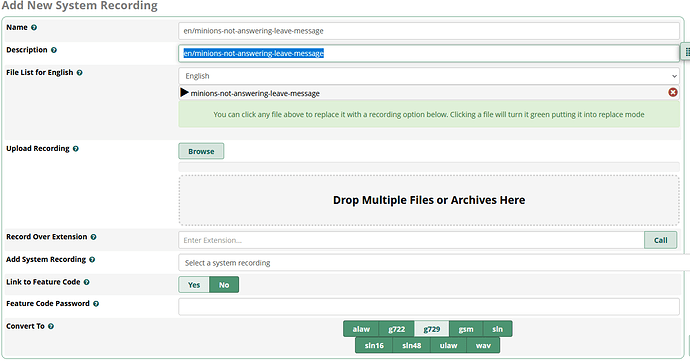 Not sure if this would help, but just comparing my settings to yours - at the bottom section where ‘convert to’ is, try only selecting wav? to see if that works?

Yes that would work, but I would like this recording available in multiple codecs on the system if I can. I know I do not have g729 installed/configured, so that is why it is unchecked.

What is really concerning is that it is dying once it hits the ulaw codec, one of the main codecs used for FreePBX/Asterisk. I also checked the /var/lib/asterisk/sounds/en folder and these file already exist, so I do not know why it is trying to convert/create them:

Ahh, with the help from some of the guys in the Open Source Lounge Sangoma Meet meeting this evening, I was pointed in the right direction.

The “console” the error message is referring to is actually the web browser developer console used to browse the FreePBX instance. In Firefox, simply hit the F12 button and click on Console in the lower-left hand side of the window:

For Edge and Chrome, to open the Console, press Ctrl+Shift+J.

Once I did that, I was able to look at the error, but I am still unsure as how to go about fixing it as of yet. Here is the output from Firefox:

I get roughly the same error message in Edge as well:

It looks like there is two file extensions on the end of the file, .ulaw.ulaw. I will see if I can find more information about the “Unable to find an intermediary converter” tomorrow at some point.

I would like to add that this does not happen when I upload a .wav or .mp3 custom file from my desktop to the FreePBX system, but when selecting a built-in “Add System Recording” recording.

With your confirmation that this was on a 16 system, I was immediately able to repro, ticket is here:
https://issues.freepbx.org/browse/FREEPBX-23450

I had been testing with 15 where this is not reproducable.

Does this mean I discovered my first-ever FreePBX bug? Yay!

Whenever this issue gets fixed, is it just a matter of updating the System Recordings module through Module Admin or yum, or would it be something more extensive like a full system update or a full fresh system install?

If you enable ‘watch’ on the ticket, you’ll be notified of progress. At some point it will will say the fixed version, after which you can update the recordings module via module admin.

I see as of this morning that the open ticket has been set to ‘resolved.’ How long does it usually take for a fix to be applied into an update?

Also, which module would this update affect? I went to the Module Admin but I do not see a “System Recordings” module listed under the Admin modules.

The ticket will be updated with the module(s) and version numbers with the fix once they’ve been published.