I am just testing the FreePBX 2.10.1 distro as potential to replace Elastix 2.3 that I currently use in production environments.

I am using Sipp to load test the distro and have installed it to a couple of different HP servers that previously had Elastix on, and on which I ran the Sipp tests from a third PBX box.

the problem I am facing is that on both machines with FreePBX 2.10.1 distro fresh installed with no tweaks, neither can test past 90 calls from the third PBX It wont send any more. I have to assume something is limiting it on the FreePBX distro settings as I could go way past 90 when testing Elastix.

FYI the SiPp method I am using is documented here as the RTP media based one using uac_pcap.xml 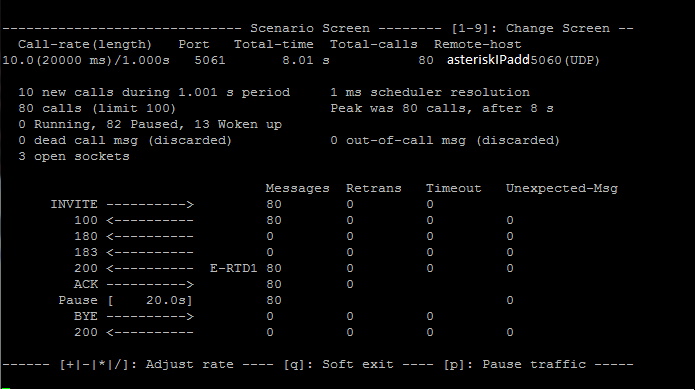 Tool: SIPp  from HP SIPp is performance testing tool for SIP based protocol. It's open source and quite easy to start with. Detaile...

just worked out that the problem is the uac_pcap.xml file that has settings within it to run for only 8 seconds per call. I increased it to 15 seconds (instead of 8) as a test and this allowed more than 90 calls to occur.

though I suspect I may need to increase the length of the corresponding pcap file to run a true test using RTP traffic in the call loads for the full duration of my increased time.

if anyone has experience of using the above method for Sipp load testing Asterisk boxes I would be interested to hear your experiences. I have a feeling it isnt a true representation of a two-way audio call from the traffic I am seeing between machines but it is close enough for my purposes.

if anyone has experience of using the above method for Sipp load testing Asterisk boxes I would be interested to hear your experiences.

Two threads over on the PIAF forums in case you are not aware of them:
installing-and-running-sipp
stress-testing-asterisk