I’m struggling to effectively set up my SMTP settings for FreePBX.
‘The error I get is Failed to process message due to a permanent exception with message [BeginDiagnosticData]’

Does anyone have any advise or steps I can follow to set up the email settings on FreePBX.
I was able to send a test email on Gmail not office365.

Pay the $25 for SysAdmin Pro. It just works. 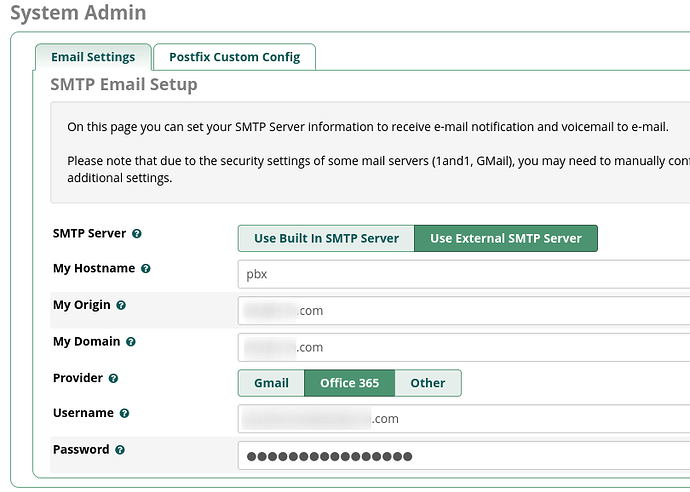 Thank you for replying, I’ve purchased the module but I’m still struggling to get it right.

“It just works” must be a minor lie. I’ve purchased this licence for my customers SMTP. I’ve never managed to get it to work on any of my customer systems. I want to use the customers domains so that we have full control but despite trying many many times to configure the “Other” option, it “just doesn’t work” I suspect that it has only ever been tested on Gmail & Office 365, neither of which a discerning “open-source” follower would use. The paid interface for “other” does not include SSL just TLS and none. And Sangomer wonder why I’m reluctant to pay for anything else. If the most basic of functions cannot be fulfilled even through the “commercial” offering, why would I buy more?

The paid interface for “other” does not include SSL just TLS and none. And Sangomer wonder why I’m reluctant to pay for anything else. If the most basic of functions cannot be fulfilled even through the “commercial” offering, why would I buy more?

SSL doesn’t exist anymore. SSL became TLS about 20 years ago! I can vouch for this working for both Office365 and for third-party, secured, authenticated SMTP services – example: 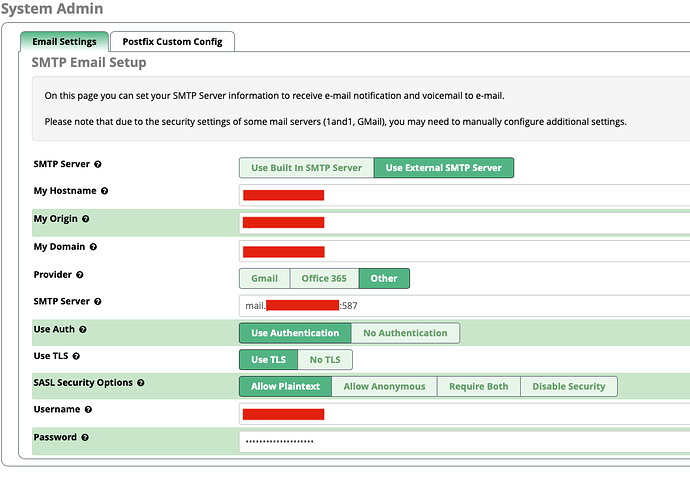 Thank you Bill, like I haven’t tried that. My Linux server supports both SSL (on 465) & TLS (on 587) yet nothing I have been able to do on any of the systems allow this to function. I don’t get email and I can’t configure external storage. Once upon a time I used to be able to do it all with FreePBX. Now it’s becoming less useful and far more hassle. I’m sorry if that sounds negative but, I’ve been using FreePBX in it’s variuos versions for over a decade and I got more out of it a decade ago.

Just because it doesn’t work for you doesn’t mean it’s untested and broken, as you imply:

If you wanted to open a separate thread for troubleshooting help, maybe some of us in the community could lend a hand.