I am using FreePBX version 16.0.26 alongside with Asterisk version 16.28.0 and have been following the guidelines given with the “Filestore Module” to set up a back up process to my Dropbox account.

I have created a “Dropbox” account space under the “Settings → Filestore” menu option of the FreePBX GUI, and have supplied the “Account Name”, “Token” and “Path” information.

Under the “Admin → Backup & Restore” menu option of the FreePBX GUI, I have created the backup definition using as “Storage Location” my Dropbox “App” name defined as above.

I clicked the “Save and Run” button, and am getting in a pop window a log showing the status of the newly backup process. At the very last stage, I am getting the following message:

I double-checked the “App” directory of my Dropbox account, and indeed, it is empty, though a backup has been successfully created under a subdirectory of the “/var/spool/asterisk/backup” base directory. The subdirectory name reflects correctly the name of the defined backup scenario.

Unless I missed something, can anybody enlighten me on what might have gone wrong here if I have correctly followed the steps as described above?

This is the error, have you regenerated a new token and tried?

Yes, I copied the generated token from my Dropbox “App” definition, and pasted it in the “Token” field of the Dropbox destination definition under the “Settings → Filestore” as depicted with:

(Note: I masked the token here with a series of “X” characters as I do not want to reveal the real token string.)

I have deleted the Filestore definition, and have recreated it with the same “Token”. This time, the backup worked fine as depicted with:

Above log displays that the “module manager returned no data, no backup created”.

Thus, not sure how to interpret above warning message.

I manually ran the backup process again with the same configuration and the same token as confirmed with my last post.

I am getting the following output:

Simply a screen dump of the Dropbox contents for the configured FreePBX backup: 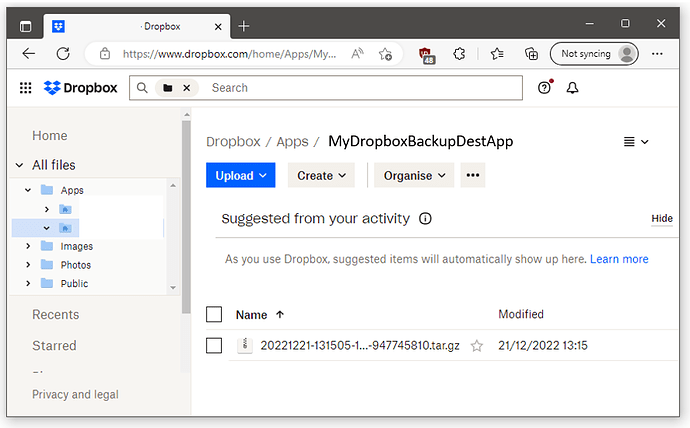 It is showing that only one backup is stored. All other subsequent backups are absent in the destination directory as defined under the “Settings → Filestore ” of the FreepBX application.

Seems that the backup to the Dropbox destination failed again. The Freepbx application just kept the first backup as outlined in my previous post.

Under the “Dropbox Developper App” console panel, I checked the configuration and status of the defined backup destination for Freepbx, and see that the previous defined token is no longer there as depicted with:

Why is the access token no longer there? Does it expire after its use (notably when having transferred backup data from the Freepbx application)?

It looks I may have found the origin of the problem allowing me to reason on why the FreePBX backup to my Dropbox account does not work with a token:

The Dropbox community post with its title “API Access Token Expired” explains “that tool is just meant for prototyping Dropbox API calls, and currently has early access to an upcoming “short-lived access token” feature. That means that, unlike standard Dropbox API access tokens, the access tokens you get from the API Explorer will expire by themselves. (You can identify them by the “sl.” prefix you mentioned.)”

And indeed, when I generate the token for the FreePBX scenario, the generated token strings starts with “sl.” following by a series of other characters and numbers. This explains why the FreePBX backup fails with an error message that the access token has expired.

According to the section “Testing with a generated token” of the “Dropbox OAuth Guide”, the “authorisation process for the API call can be accomplished by a temporary token before implementing OAuth”.

The subsequent section “Implementing Code Flow” of the same guide explains in detail the recommended code flow to be used mandating an OAuth approach for all types of API applications using a specific URL of parameters with client ID, code and secret for authorisation to exchange an access token in order to make API calls between the APP and Dropbox.

What is your take on this?