Yes, I know Chan_SIP is going away, but for the time being, does FreePBX 16 still have the Legacy Tab for Chan_SIP?

You can for now enable chan_sip in v16, but it is disabled by default.

It would be good to start a conversation of why chan_sip is still needed for certain providers, I know that many providers say they “don’t support chan_pjsip” but that is just their BS, SIP is SIP and they would have to explain what part of PJSIP they don’t support. On the other-hand FreePBX/Sangoma/The community could better provide recipes for migrating chan_sip to chan_pjsip for those providers, and there are a lot of them, that deny that reality before disabling by default

So to date my lack of conversion has been a mix of finding the time to bring the production server down and/or spin up a secondary server and perform some kind of a conversion. A clear recipe guide would be nice, I have seen the conversion script. I have struggled with trying to do a conversion in the past, it wasn’t a conversion on the extensions (never got to that point), I struggled with a conversion on the main trunk to pj_sip. My sip provider does not provide any clear documentation for support of PJ sip where as Chan_sip worked out of the box for me. I did attempt to convert the trunk about a year ago and failed to make any sort of connection to my provider which is thinktel. I also tried in freePBX 15 and couldn’t seem to make the pjsip trunk connection work.

I am going to reach out to some of my peers shortly and see if they’ve had any luck. I also called thinktel at one point and they basically pretended they didn’t even know what Pjsip is. I imagine I’m just missing something small, But to date I have not come up with a valid configuration that will talk to their gateway. I am going to try again over Christmas but wanted to know if I could use the newest freePBX 16 (which I understand is in the stable channel now ) until I get to that point I’m already using FreePBX15 on the newest updates for my back up server and all works well with chan_sip for the time being, but I do have to admit the thought of the conversion and the upcoming timeline creeping in is stressing me out a little, I just like to get it over with. I have about 700 users that are depending on it FreePBX, its worked great to date but I just need to get this conversion going and then I’ll feel a little more in the clear again. I would also like to add, that I don’t think chan_sip is on thinktel’s Radar, and I think clear direction and documentation for Providers in regards to pjsip, from sangoma such as thinktel would go a long way.

Specifically, who is your provider ? Maybe someone else has tilted that windmill.

Yeah that was quite long so maybe you missed it in that paragraph, it’s ThinkTel. They are a huge Canada wide provider. I am going to reach out to some of my peers as well, but yes, maybe someone in here has crossed the bridge with ThinkTel and pjsip.

ThinkTel shouldnt care about Chan_PJSIP. SIP is SIP so lets not conflate a provider not having how to docs as to what their systems can support. Because what the history of Chan_SIP has shown is that many providers either had bare minium settings or had a config with incorrect settings that Chan_SIP wouldnt use anyways. The only difference is Chan_PJSIP actually cares when bad settings are used.

I have used Chan_PJSIP on various providers, no issues. Even ones with no configs to show. I have used it to peer/register with other SIP systems and FXO/FXS gateways. No issues.

Have you had any experience or success directly with thinktel and pjsip? Any direction with pjsip and this provider would be much appreciated.

i’m thinking for my part again, is that I will spin up a new freepbx 16 box, Restore my config and then try the trunk connection again at this point I should have some logs if it fails and I can post those logs back to here and then maybe we can put our heads together.

With ThinkTel? I haven’t done anything with them but again, it’s just SIP. Chan_SIP and Chan_PJSIP are Asterisk drivers. PJSIP, itself, is a SIP driver that has been around since 2005. To put that in context, Asterisk 1.2 was released in 2005.

If I had their settings for a SIP trunk, I could bang out a config in under a couple minutes. It’s not that hard at all.

Yeah, their setup stuff is rather basic for Chan_SIP anyways. Here’s as about as basic is gets, replace NXXNXXXXXX with your username. Set the password correctly. 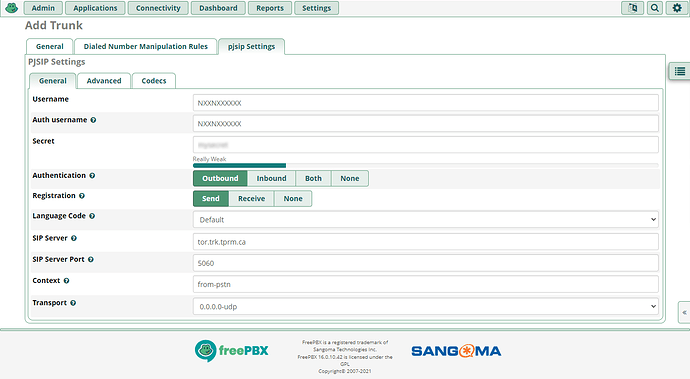 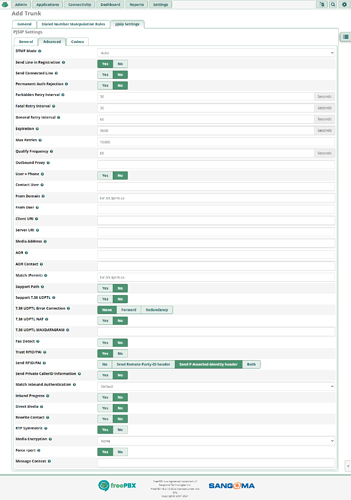 Okay, I will fire up a new freepbx 16 box, import my config and give this a try. If I run into any bumps, I will post back here.

Can I test the trunk on pjsip, but still keep my phone extensions on chan_sip for testing or do I need to convert my extensions right after I do the trunk as well? (Does the built in conversion script work well?)

Excellent that will be helpful for testing.

just in case you were not aware, both channel drivers have to be on different ports for security, neither on 5060.

Thanks. I will give this a go. Hopefully I can do this in a timely enough manner, so this thread dosen’t close in case I need to report back and get some extra advice / help.

Hopefully this dosen’t seem like a silly question, but once I have this all worked out, all services should just “work” correct. For example, I use the fax pro module (Works great), that should just continue to work as long as I get this part correct, is that a good assumption? No other adjustments needed as long as the Trunk and extensions are working on PJSIP?

PS - I thought I read somewhere that FreePBX 16 is now Stable for releases, but I see on Freepbx.org that FreePBX 15 is still listed as the stable release, I’m thinking maybe I need to stick to that one. 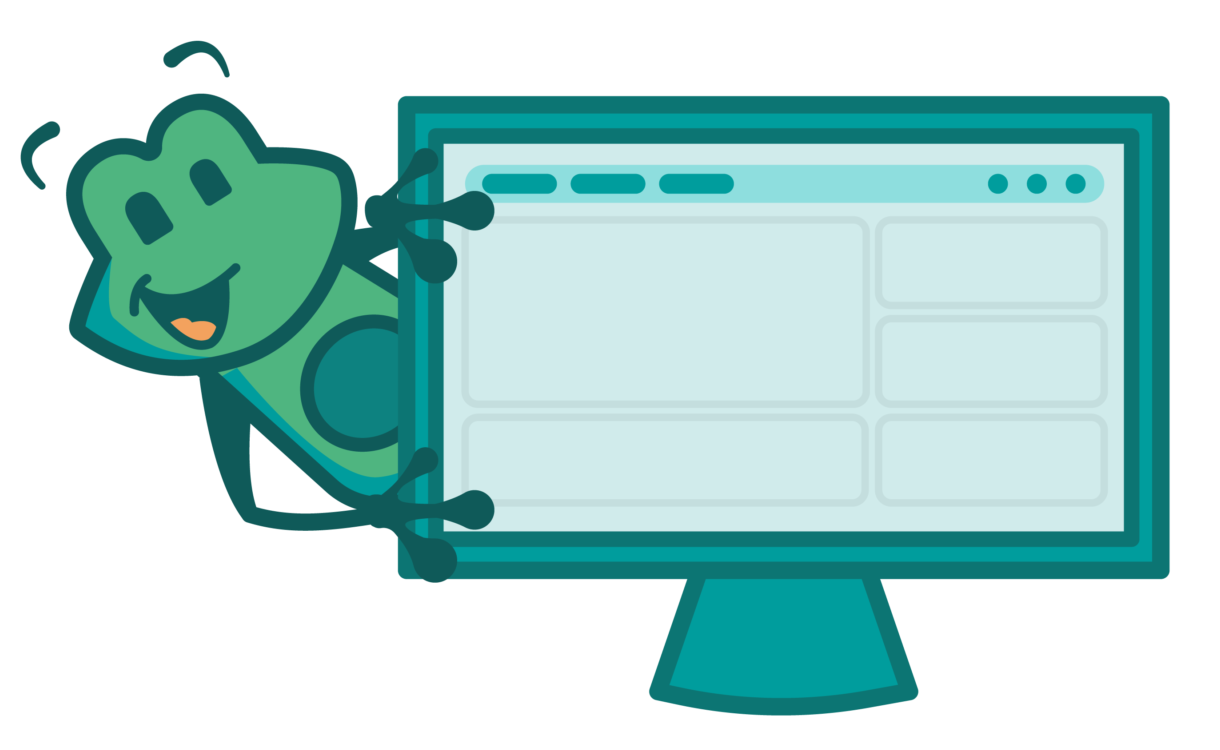 The FreePBX 16 beta was announced back in June, and since that time, we have seen thousands of FreePBX 16 installs. Our Engineering and QA teams have

Except then you have to make sure everything is sending to the right port. Without looking at your old post, I would wager moeny that was part if not all of your original issue.

don’t support chan_pjsip” but that is just their BS, SIP is SIP and they would have to explain what part of PJSIP they don’t support.

I started a wiki page on setting up 3rd party trunks in PJSIP. It may not have made it public and I no longer have “internal” access. I think I did a couple and the idea was to have a community driven page.

In general most providers have that blob you paste for chan_sip, likely copied from voip-info 15 years ago. They likely don’t use FreePBX and have no idea how to add it to FreePBX.

Something useful may be to take that standard blob and associate the fields to pjsip settings.

Thank-you for all the direction.