For the life of me I can’t get a fresh install of Freepbx distro to finish. I’m installing via flash drive and it boots to the drive ok and gets mostly through the install and fails every time. I’ve tried it with and without a network connection, I’ve tried multiple computers, and I’ve tried multiple versions of freepbx installers. I’ve also tried multiple flash drives and multiple image writer programs. What in the heck am I doing wrong?

Attached is a picture of what the error looks like. 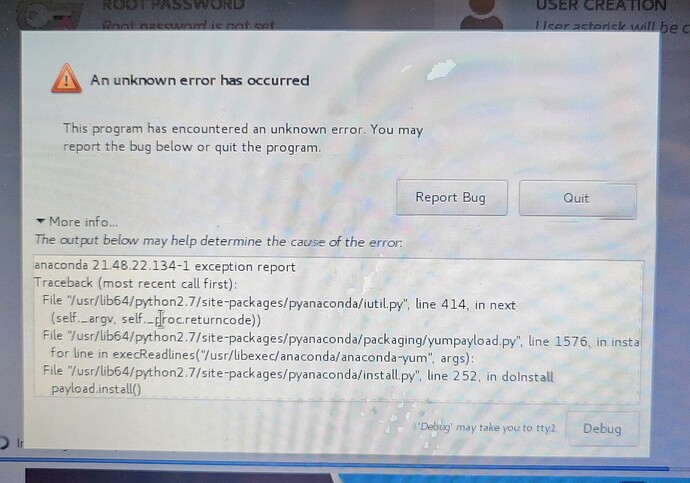 You will need a “working” network. If you can guarantee that, then :-

On what hardware are installing ?
and
Have you checked to md5sum’s of the downloaded media against the published ones?

I’m positive my network is working.

My guess is that your network hardware is not supported by the install kernel for your i5’s .
You can change the console tty (ALT-CTL-F{1-7} or as the screen suggests, press the ‘debug’ button for tty1 ) to check errors and try to ping something , maybe consider using an usb/eth adapter to get you past this, then install a .ko for your intel/broadcom eth hardware.

I tried four different USB adapters. Two 10/100 usb 2.0 and two gigabit usb 3, each was a different model. All of them showed a valid connection.

By a ‘valid connection’ , do you mean you could successfully ‘ping www.yahoo.com’ from tty1 which shows a Layer3, (IP connection with a valid address, gateway and netmask, presumably awarded by your local DHCP server), or (the ‘link’ led was on, (Layer2, ethernet))?.

Other thing to check would be the ‘uefi-ness’ set in the bios.