Asterisk on RPI to Control Robot

My tech-oriented son is fascinated by Asterisk and wants to put it on Raspberry PI so that he can use cellular phone to control a robot in an area in Alaska that has cell service, but no internet.

In the realm of possibility. There are threads here about using Asterisk with Node Red and using the Dynamic routes module to make API calls. Prob need a bit more info. Can the robot receive commands from the internet, or does it need a cell connection to the PBX as well as the controller?

The RPI has GPIO pins that can be configured to provide digital or analog I/O and also PWM servo controls. He wants to be able to dial into the RPI running asterisk over GSM from a cell phone on a boat to control a robot with a RPI on the side of mountain using cell signal. The internet there is unreliable. They have tried satellite, microwave relay and even shortwave, but none have been reliable. He doesn’t need much bandwith. Just wants to get status codes and to be able to send a few commands.

You have a low bandwith analog connection but no direct digital connection in a phone call, Feedback for both control and knowing WTF is happening (video) will be a problem here, pethaps use inband DTMF for digital control and TX/RX PWM audio in a negative feedback loop for control, I assume pis both end.

Is a data only sim connection over a gsm modem a la google fi or telnyx feasable ?

I don’t know most of what you’re talking about… But I will forward the info to my kid. Thanks

I think it’s the best idea controling IO with DTMF and send any requests through AGI which will set or read the IO values.

Bonjour @fdanard ,
This makes it a little more reasonable

Depending on the autonomousness of the robot, a minimum of 2 analog channels for motors and a 2.7k bandwidth doesn’t make for a very responsive system, hence the telnyx/fi question, too far north for starlink yet i think.

Where the son is mission control, the pi is the orbiter the robot is the lander.
Though he probably wont need a 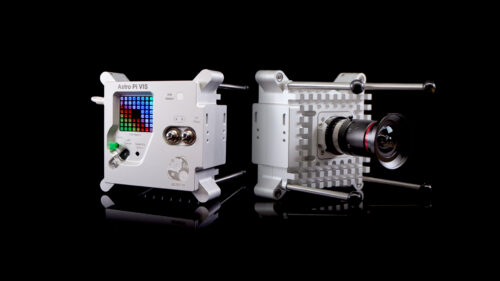 We are sending new, augmented Raspberry Pi computers up to the ISS for the European Astro Pi Challenge for young people!