I don’t know much about FreePBX…man this software is sure finicky. Why when one reboot there is always some triangle alert that doesn’t seems to make sense? I just update and reboot…the dashboard is showing this when I hover over with the mouse…why? Is it better to update from the console CLI? I am a Mac person for years and tend to use the GUI in all things. 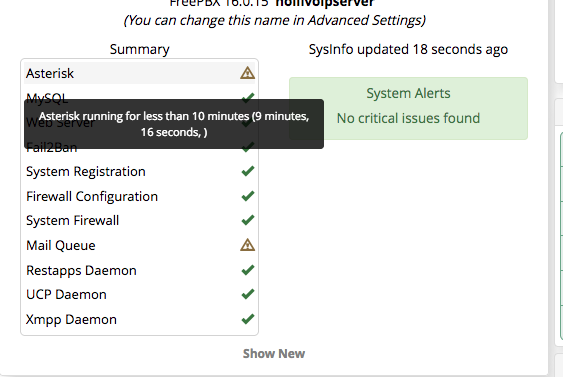 The operation is not affected by the hints and the cautionary measures are very likely due to the complexity of FreePBX. If you do not like FreePBX, give Kamailio a try, :).

One can discuss whether FreePBX or Asterisk really need the current open structure, since that adds significantly to the complexity. If you would have a simple GUI, you give up much of the current power. Also, telephony systems are also not closed systems in the sense that there is a single correct configuration. For example, think of a service provider that uses SRV records, but does not globally maintain the state of the registrations.

The idea is a quick indication of potential problems. If you have a user report calls dropped and log in to see that message it’s an indicator that either Asterisk or the server has crashed/rebooted recently.

Actually I don’t know what your problem is

It tells you, why the triangle shows up anyway. The Dashboard does not distinguish between a reboot or any other reason, why Asterisk is currently running less than 10 mins. It just tells you.
If one isn’t willing to spend a few hours to understand a free voip software, the powerful and flexible freePBX is possibly not the right choice.

It will probably take you 10 minutes to fix your mail problem after that both ‘issues’ will go away.

I already went on the FreePBX path…never thought I would an alert when there is no SIP trunk provider yet.

I do not have a SIP Trunk provider yet; so, it should know there is no calls expected.

To a new user, when one sees that one goes hunting trying to solve a problem despite one doesn’t even have a SIP Trunk provider yet. Plus, I had just reboot as stated in first post and wasn’t expected to see such message…seems an unnecessary alert. It should have known that the system was updated, and a reboot is expected afterwards.

Dicko, I end up finding that out after making the post except the mail queue still there making up its face when there is no SIP provider nor extensions added. So, it seems an unnecessary alert to send one off on a tangent.

Separately, discovered one needs to own a real domain to get a Let’s encrypted SSL certificate…it just that the subdomain would be a secret. Wasted lots of time to find that out and why I haven’t had a running system yet.

Did you (at least) buy the System-Admin module? Is it 25$? It is much easier to set up your email with this module…
I have been using freePBX for many, many years…it is very powerful, but you have to spend some time!

Time, spend some in the wiki, it would have and will ongoing save a lot of yours.

That’s a really odd comment. The fact you don’t understand it doesn’t make it less useful. As @dicko says, probably need to look at some tutorial videos and read the wiki before commenting on the functionality etc.

I didn’t read all the replies so forgive me if anything I say is redundant. I was a core developer of FreePBX for 6 years and have been a community developer for 10+.

Everything in the UI has a reason. This is meant to be an administration interface. As a sysadmin you want to know everything that is happening on your network. In some networks you have to consume a lot of data to make decisions. The goal is to present this data as efficiently as possible. On a larger network you may have something like Nagios doing a lot of this for you. In a smaller network your receptionist may be your IT person.

Your example “Asterisk has been up 10 minutes”. Why do you care? Well if you booted or restarted 10 minutes ago, you probably don’t. If you have 300 days of uptime and haven’t restarted asterisk in a month, perhaps you want to know it restarted 10 minutes ago. If something is crashing my communications I care A LOT. If something isn’t working like restapps, I look at your screenshot and know it isn’t the daemon, so I can look at other things. If that is a triangle, restarting that is my first step.

As I said above every component has a reason. Either added at the request of the community, support, or the bean counters. Personally as a developer I add things so support and other humans interact with me as little as possible while I am working.

LOL…I know and that’s the plan when I get a working system…there is lots to configure when one is new.

Time, spend some in the wiki, it would have and will ongoing save a lot of yours.

I have been spending maybe too much time which included HAproxy implementation.

Not at all…remember, I would not have embarked on this as well as purchased hardware and phones it I thought it was useless…what I said was it is finicky or easily upset.

I was a core developer of FreePBX for 6 years and have been a community developer for 10+.

Thanks for stopping by to say hi. Earlier, I was looking at Clearlyip.com to take the trial. I must say that I like the brand name.

Isn’t this a pretty good walkthrough?