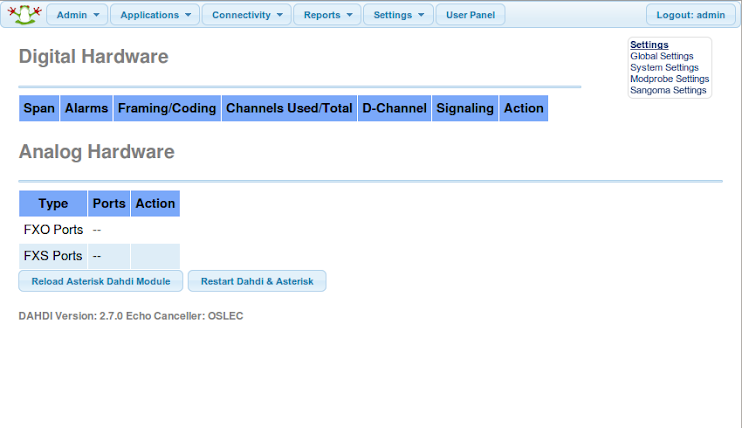 First of all why would you add anything to a ‘custom’ file?

Secondly do you have any actual hardware in your system? Doesn’t look like it.

First
What else to add to a ‘custom’ file?
I want to add ‘DAHDI Trunk’, butOutgoing Settings
No Available Groups or Channels
Configure/Edit DAHDI Cards
or add ‘Ceneric DAHDI Device’, butThis device uses dahdi technology.
Channel ==Choose==
there are no channels.

This not actual hardware in my system?

I don’t think the module supports that hardware (whatever it is). You won’t have any luck in the gui. Sorry

It is not hardware but a layer 2 driver and part of dahdi as dynamic=ethmf. . . . , often used to connect dahdi instances on an ethernet, Redphone use it for their redundant hardware, I for direct integration between physical PBXi, you can use it over TDMoE and TDMoIP indirectly like the RAD stuff.

You cant use the dahdi module for that. The DAHDI module if for managing DAHDI cards that are listed as supported only.

The area you are listing has nothing to do with the module AND nothing on the detection engine has changed since digium wrote the module and they are no “HELPERS” (it uses all of the dahdi binaries). Your device isn’t supported. The way devices are listed is that php runs dahdi_cfg to get a list of the devices on the system. How about you run that and let me see what I can do.

I guess I mean that if your module is designed to “help” dahdi to generate files in /etc/dahdi and /etc/asterisk and it doesn’t work for this particular scenario, then he shouldn’t use that particular “helper” function, as it will confuse generally not work.

That has nothing to do with you only using dahdi binaries, that the issue of dahdi_cfg is not parsed completely and correctly by the “helper” function (the dahdi module) is quite understandable, I bet you don’t do the pci-radio interface either.

I suggested to the OP that as your boss says, “we don’t support that” then uninstall the dahdi module and do it manually. That’s all, IWFM and always has for TDMoE spans in dahdi.

Dicko…maybe…perhaps as the diligent developer I am I wanted to see what that binaries return to perhaps add this into the module at some point in the future. Please think bigger picture here, especially since I re-wrote the whole thing from digium…remember…that company that owns asterisk, yeah they wrote that helper function…

I guess it was your capitalized “HELPERS”, seemed like that was directed at ME personally, as that was the only previous use of that word in this thread and I used it in lower case, I pointed out from my first post that the OP was obviously trying to implement a dynamic eth, which apparently eluded you, so whatever hardware was that connected to is immaterial, dahdi_cfg does return that device and as I stated I have used such configurations for years and was advising the OP to not rely on a module that does not currently support it (but apparently maybe used to) as has been stated twice. I have nothing to prove, I am just a pragmatist and can generally make things work without helper functions.

I am sure it will be trivial for you to add support for that time honored dahdi device also, and I look forward to that resolution.

Touche I suppose. But my point is that you make these general wide sweeping comments about code in freepbx that you do not understand and you’ve never looked at so it gets quite aggravating. The section both of you have listed isnt directly tied into the module (in fact it exists if the module is uninstalled, it’s just modified with more options when the module is installed)

You often advise users to not use modules or features in freepbx and do it manually. Which is fine I suppose. but all these users want is a way to do it in a GUI. These are the forums for the FreePBX GUI after all. So continuing to say “oh its the fault of freepbx for using helpers, dont use those helpers” baffles me.

It’s also generally hard for me to believe this card ever used to work.

TM - I know you have not liked my comments about the DAHDI module in the past. I have thought a lot about and I think I see the distinction from a “power user” standpoint.

When using the FreePBX core functions I never have to peak at the dial plans, or the created peers, rarely have to look at AstDB or MySQL.

With DAHDI and with the networking I am always peeking under the hood as neither ever does exactly what I want.

I could never code a dial plan or an extension with the accuracy and efficiency of FreePBX. I can setup CentOS networking and DAHDI configs by hand faster than in the GUI.

It’s not a knock on the code, and the goal is admirable. I am just not sure that you can ever automate these functions adequitely. Even the X tools suck for networking in Redhat.

I think the other parallel is Proxmox. It’s great at managing and creating VM’s but I can get around quicker in Libvirt than I can the GUI, and find out what is going on.

BTW, the FreePBX shell tools are also awesome. Taking the time to learn the shell makes you a better user.

It’s not that I haven’t liked either of your comments but I am already fighting an uphill battle from the days where the module really was terrible and I feel offended when people say “Oh it’s a waste don’t use it” when they last tried it 2 years ago. It’s the nature of the beast and I’m protective of my code when it comes down to it and perhaps I just need to be more open minded and that’s fair.

Working in the configuration files is also fair. But the module has changed much in the last year and I want to add as much to it as possible. Well as much as I can to make it better for users and no I don’t want to dumb things down. I am trying to stay away from that route.

When it comes to corner cases like this situation I would always say just uninstall the module as it doesn’t work. What I don’t like hearing is ‘it wont work because the lousy developers use helper functions’. None of you said that directly but we all see the world through filters and I am probably terrible about filtering when I see my own code talked about.

Also the section mentioning where it used to be really has little to do with the dahdi module, so I dont know why it would have shown up before but not anymore as the sub functions are really all the same.

In the end, to each-his-own however I’d really like to be able to have FreePBX do more. So I’m always attempting to have these tools do as much as possible. I’d like FreePBX to succeed in the years to come where I’m sure we will have more competition and I’d like our product to be the best SOHO phone system it can be…and perhaps bigger and better things…

I also need to have a look at it. Haven’t in a few months. I am meeting Tony on Friday, I might have some time to work on the lab machines.

So I don’t know what you are trying to prove to anyone when you state those, quite erroneously IMHO, opinions.

Either way , the current dahdi module, (which is what I mean when I say helper), is generally agreed to be not useful for this OP at this point in time.

It is generally hard for ME to believe that you still seem to think that “this card” is a card. Oh well.

ugh! Dicko! Yeah I get that it’s not a card. It’s an ethernet device that goes over ethernet cables and simulates a dahdi device. Sorry that I said the word “card” (does it really ever. matter!), again this is you nit picking my statements for fun. What the heck is the point? Does it make you feel better as a person to belittle me? You always, in almost every thread have wide sweeping opinions on freepbx and the code base and modules and what we do and when we call you out on those opinions you start to wave a white flag and claim innocence and point your fingers back at us. Please look back over the past year and consider why it is you have come into conflict with almost every lead on this forum. It is not because we are all evil people. I just wish you would admit your own wrong doings and mistakes instead of continuing to cause drama. Now I am wrapped up in this drama. Geesh all I wanted to do was help and I keep coming into continual conflict with you. It’s ridiculous! This happens 75% of the time with you. Please step back and take a look at what you do and what you end up causing.

You’ve proven me wrong. You win. How many times do I have to say that before you can smile and walk away. Don’t use the module. I would like to attempt to make it work. Some day for virtual dahdi cards… Oh wait is this not a virtual dahdi card? Will you nit pick me for calling it the wrong name again. Who cares! All I care about is getting it to work.

My main issue with you is that you seem to nit pick apart anything anyone says. It must be a blast. Please stop. Look at the bigger picture. If I said card does it really matter if it works in the end regardless of the word “card”.

Then I actually go out of my way to semi-appologize (look at the last post in this thread) and you don’t even reply to that, instead you nit pick another comment I made?

Remind me never to participate in another thread you reply to. What a waste of my time and my stress and I’m truly sorry I wasted everyone’s time with my own drama here.

Hello!
Were you able to solve the problem?
Faced with exactly the same problem as you. All statuses indicate that the asteroid is working, but freepbx not see any channels.
Configuration files are similar to yours.