Also Cisco support for that doesn’t matter in this case as I am not using CUCM nor does that phone have an active support contract. I got the 9951 as an introduction to how VOIP works. ( I am a network engineer by trade ) and decided hey its cisco their stuff is great in the networking side and they tend to stick to RFC’s fairly closely. Then I learned that SIP really is a bastard protocol and that FreePBX and cisco do not go together very well LOL.

When it comes to software I tend to stick to the LTS branches. (Long term support) These tend to be the most stable and rigorously tested versions that will have support for a very lengthy period of time. For example Ubuntu has LTS versions.

Asterisk 13 still gets security fixes and I dont need new features, except for music on hold in HD…it is a painful experience to listen to music, which gets destroyed by codec translations during a call.
I would switch to a newer Asterisk version, if MOH would sound like a real 16bit 16000Hz audio, but it doesnt (on external lines)…and I am not sure if it really is a problem of the telephone service providers, because they support g722 and other HD-codecs.

The Cisco 9951 is probably the worst Cisco phone to use with Asterisk even worse than the 7940s of which I have 6 of - and the only reason I even spent time screwing with them is because I got all of them free and the lure of free stuff is–well you know, free is a very good price! But as bad as the SIP implementation is for the 7940 Cisco found a way to make it worse on the 99xx series.

Have you seen this:
http://labs.wrprojects.com/configuring-a-cisco-9951-phone-for-asterisk/
As it contains instructions on configuring the 9951 with FreePBX

The reason Cisco phones are dirt cheap on fleabay is because Cisco is the darling of large corporations and large corps sometimes like to do forklift replacement projects. Since Cisco is giving the boot to the 9951 model in a few months by the end of the year Ebay is going to be flooded with those phones.

If you are thinking of going into VoIP business it’s worth it to learn Cisco product’s peculiarities but in my opinion Cisco has become ruined over the last 20 years, they have headed down the embrace-and-extend path for a long time now. I rarely specify them for new customers of mine anymore. 20 years ago though I was installing Cisco routers for every customer. Those were the days. Sigh.

Get yourself some used Polycom phones they are very cheap since Polycom sold dump trucks full of them to Ring Central who handed them out like candy, and as subscribers dumped Ring Central years later they dumped these phones - and unlike many phones out there Polycom provided a way to allow someone with physical control of the phone to be able to unlock it and use it with off-the-shelf Polycom firmware. The only thing that is annoying with them is that they default to using FTP for pulling a config after a factory reset on startup instead of TFTP. You can pick up a Soundpoint IP 335 for around $13 off Ebay for example and that’s an excellent little solid phone and easy-peasy to configure.

I never understood, why people spend $1000 on a cell phone, but refuse to pay $200 for a desktop phone.
The Digium/Sangoma D65s are excellent phones and you have two options of using them with freePBX, the EPM or the Digium-phones-config-module…actually there is a third option…the advanced DPMA configuration with xml files…

The Digium/Sangoma D80 is even better…but it is missing an important feature, which is a remote restart option. Currently the German translations in the GUI of the phone are also very bad…

The D80 definitely has a “nice display” 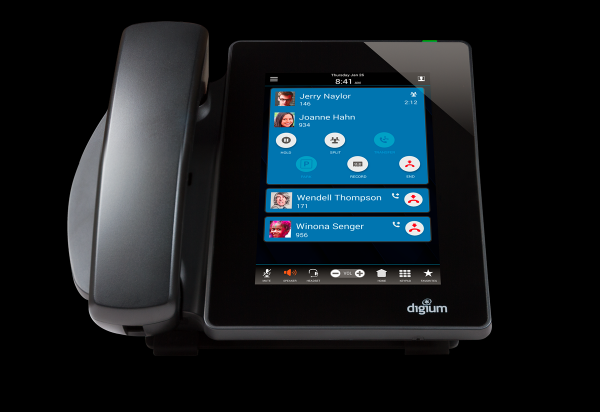 Alright! Thanks to the mods for bumping my privilege level I can now talk more than 10 times a day heh.

SO I am looking at yealink phones but I do want to get my current install back to status quo. Preferably without having to reinstall. Fixing broken things is how I learn so I would really prefer to fix asterisk (if possible) My goal would be to get on asterisk 18.3 and have FreePBX recognize the installation.